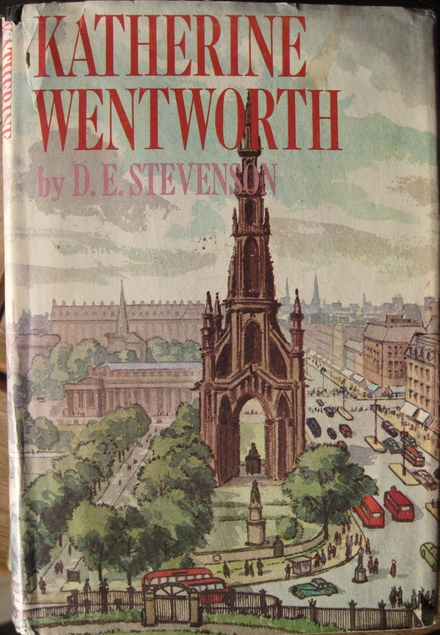 Katherine Wentworth by D.E. Stevenson was first published in 1964. My book is an original but sadly it didn’t have its cover. As you can see from the one on the right which I found on the internet it’s a lovely illustration of the setting.

Reading this book was like soaking in a lovely warm bath, and it was just the sort of reading that I needed to take myself away from all the rotten things that are happening in the news at the moment.

I suspect though that it means I’m terribly parochial, because the fifth word in the first sentence is Edinburgh and Katherine is walking in Princes Street gardens, just as I was one day last week. I can’t help it, for me it’s always a plus when I can see clearly the locations in my mind.

Katherine has had a tough time of it. She’s only 27 years old but she’s already a widow with two children of her own to look after as well as a sixteen year old step-son. Money is very tight and she had been very down for a while but she dragged herself out of her despondency, concentrating on trying to be cheerful and being determined to keep her independence despite an elderly aunt asking the family to move in with her.

Independence had been important to her husband Gerald when he was alive. He had been expected to manage his family’s estate, despite not being in line to inherit it, and his determination to follow his own dreams led to a split with his family. Some years after Gerald’s death his elder brother also dies and as the estate is entailed it means that Katherine’s step-son will inherit it and she finds herself having to meet her intolerant and bullying father-in-law.

A chance meeting with Zilla an old acquaintance from school draws Katherine into an unwelcome relationship with her. Zilla is a manipulative compulsive liar, but fear not – she also has a brother!

As I implied earlier, this was a comfort read for me, especially as the action moved around Scotland to Moffat and Peebles and lots of places known to me. Old fashioned maybe, but very enjoyable.

I read this one for 20 Books of Summer and also Read Scotland 2017 Challenge.