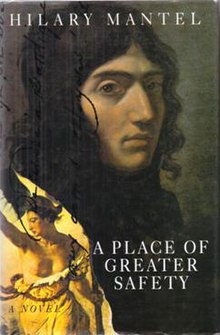 I hadn’t even heard of A Place of Greater Safety by Hilary Mantel when I spotted it in a second-hand bookshop in Innerleithen. I quite fancied the subject matter though, the setting is the French Revolution and it’s a chunkster at 872 pages. I was disappointed for the first 100 pages or so and I did think that Mantel had definitely improved in her historical fiction with Wolf Hall, but this one eventually got going.

This book has an eight page cast of characters at the beginning, which is just as well as it certainly helps the reader to keep things straight. I think we all have a fair idea of what went on in revolutionary France, but this book begins in the 1760s with the early life of the main participants in the grab for power in the 1780s.

Mantel says in her Author’s Note that where possible she used a lot of the characters’ actual words, whether from their written speeches or preserved writing and has woven it into her dialogue.

She also says: I have tried to write a novel that gives the reader scope to change opinions, change sympathies: a book that one can think and live inside. The reader may ask how to tell fact from fiction. A rough guide:anything that seems particularly unlikely is probably true.

I ‘did’ the French Revolution at school but reading this book made it all much clearer to me. I don’t think that my school books mentioned anything about the involvement of the British government who were working to destabilise France as a way of getting rid of King Louis and helped to finance the revolution – but now that I think about it – of course they would have!

This was a great read.

2 thoughts on “A Place of Greater Safety by Hilary Mantel”