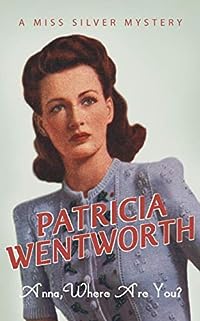 Anna, Where Are You? by Patricia Wentworth was published in 1953 and it’s a Miss Silver mystery.

Unusually (I think) Miss Silver’s entrance in this book is on the very first page where she’s perusing the births, deaths and marriages columns of her copy of The Times, but it’s the Agony Column which really attracts her interest. Someone called Thomasina is looking for Anna – Please Write. That short message leads Miss Silver into a dangerous investigation.

Thomasina is looking for her old schoolfriend Anna who has left a suitcase with Thomasina to look after. It’s ages since Anna has been in touch though and Thomasina is worried about her. Thomasina’s fiance Peter Brandon can’t understand why she is worried as Anna isn’t a very nice person and not much of a friend, but Thomasina feels sorry for her.

Miss Silver’s investigation takes her to Deepe House which is a bit of a wreck as the middle of it had been bombed during the war. Peveril Craddock, the new owner, has re-named it Harmony House, he’s an obnoxious character who is supposed to be writing a great work but his wife Emily and step-children are obviously frightened of him, although he has a bevy of strange female admirers who live in ‘the colony’ – nearby cottages.

Anna had been at Deepe House, looking after the rather out of control children but she had left no clue as to where she was going. Inspector Frank Abbott gets involved when during his investigation into a nearby bank robbery and murder he has to question the people at the house and the colony. Miss Silver’s past experience as a governess comes in handy as the Craddocks are very happy to have her as part of the household where she solves the mystery and sorts out the children too.

This one was a bit of a slow burner for me but it ended up being really good as I had no idea what had been going on!

2 thoughts on “Anna, Where Are You? by Patricia Wentworth”