The Widow of Bath by the Scottish author Margot Bennett was first published in 1952.

The book begins with Hugh Everton having a meal in a hotel in Margate, he works for a travel agency and part of his job consists of going around hotels and trying them out, he’s very jaded by the whole thing with the same meals appearing at the different hotels.

When a group of people walk into the bar Everton realises that one of the women is Lucy, an old flame of his, and she’s with her new husband, Gregory Bath who is a retired judge. Everton agrees to go back to the judge’s house for drinks along with Lucy’s aunt and some others.

When murder ensues Everton finds himself in a difficult position as he has had a bit of a brush with the law in the past.

For me this was mainly a bedtime read, and that might have been the problem with it as I found it to be too convoluted for a tired brain, otherwise I wasn’t really enamoured with any of the characters and that’s always disappointing. However the writing is good and I appreciated the humour.

The cover design has been taken from a British Rail travel poster advertising Plymouth on the south coast of England. I had a look at modern photographs of the area on the internet and was very happy to see that all that art deco architecture has survived, which is quite surprising considering how comprehensively Plymouth was bombed during World War 2.

Thank you to British Library who sent me a copy of this book for review. 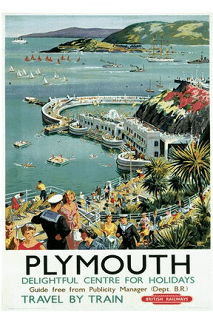 4 thoughts on “The Widow of Bath by Margot Bennett”