I have to say that the new season of TV programmes have been very entertaining. I’ve been enjoying watching The Bodyguard despite the fact that ten minutes into the first episode I turned to Jack and said – If I had realised this was about terrorism I wouldn’t have started watching it. But it dragged me in and I’m beginning to think that Richard Madden who plays the bodyguard police sergeant David Budd would make a great new James Bond. Well the best Bonds are always Scottish!
Mind you I tend to watch anything with Keeley Hawes in it too.

I’ve also been watching Vanity Fair. I had a bit of a moan when I saw a trailer for this new version, it doesn’t seem long since it was on TV in another version, but I enjoyed the book and I think that Olivia Cooke is a perfect Becky Sharp. As this one is on ITV we’ve been watching it on catchup, that way we avoid most of the adverts.

The Great British Bake Off is a must watch and although I still miss Mary Berry it’s really the personalities of the bakers who are entertaining so I’m sticking with the show.

I wasn’t sure about watching Press and after watching the first episode I’m still not sure about it. It somehow has a very old-fashioned feel to it, a bit like newspapers would have been like in the Fleet Street days, but I’ll watch the next episode anyway.

The Repair Shop is a very gentle programme featuring talented craftspeople who can restore just about anything that’s broken and damaged it seems – whether it’s an old teddy bear or a Georgian table. People seem to get very emotional when they’re re-united with their treasures. It’s just fascinating watching people work and having so much pride in the end results.

On Saturday evening I watched a film that was only made in 2016 called This Beautiful Fantastic – and I loved it. I believe that the whole film is available on You Tube but you can see a trailer below which will give you an idea of what it’s about.

Have you been watching any of these programmes and is there anything good on now that I’ve missed?

I thought you might be interested in reading some of the Guardian articles that I’ve been reading over the last week or so.

Today I read that the new series of The Great British Bake Off begins next Tuesday and for the first time they’re going to have one week when the show goes vegan, to reflect the fact that Veganism has become so popular in the UK recently. You can read about it here. It’ll be an interesting episode – whatever.

Still on the subject of food, there was an article on The not so humble potato with lots of tattie recipes, some of which I’ll definitely be giving a go. You can see them here.

As a child I used to look longingly at a neighbour’s World War 2 Anderson shelter, still standing in their garden when we moved to Dumbarton from Glasgow in the 1960s. I really wanted one! If our garden had ever had one it had been removed post-war. I thought it would be a great place to play in, a cute wee house of my own – if we had had one. There’s an article about them here. I still want one.

There’s also an article on stone-stacking which you can read here. I first came across this modern craze for stone-stacking when we went for a walk by the Water of Leith in the Dean Village area. I absolutely hated all the silly looking stacked stones which some man pretending to be an artist (I think) had decided to ‘enhance’ the river with. I had no idea that it had been taken up by lots of other people with the result that popular natural beauty spots are being ruined. Leave no trace has always been the message for people who are keen to do things in the great outdoors. If I ever come across any more of these stone piles I’m going to make a point of kicking them over and restoring the place back to what it should be, for the sake of the wildlife as much as anything else.

It’s ages since I read an article in the Guardian about padlocks being affixed to a bridge in Paris, causing damage to the bridge, and that’s another daft thing which has spread around Europe anyway. I noticed that the stone bridge at Dunkeld has had padlocks attached to the metal lamp standards on it. I suppose the padlock manufacturers are happy about it though!

For once my favourite to win this year’s Great British Bake Off actually won. I was rooting for Frances all the way. If you are interested you can read more about her and the Bake Off here.

I love her clever designs so I wasn’t surprised to find out that she is a children’s clothes designer. Although she was originally criticised by the judges for having more interest in the look of her food rather than the flavours, she obviously learned from her earlier mistakes and deserved to win.

I’m still not happy that James Morton didn’t win last year as he seemed to me to be by far the best baker. He had great taste in Fair Isle jumpers too!

This programme is just about the only ‘must watch’ one for me at the moment but I was sad when Cathryn had to leave last week. Obviously I was hoping that James the young Scottish chap with the lovely hand-knitted Fair Isle jumpers would win. 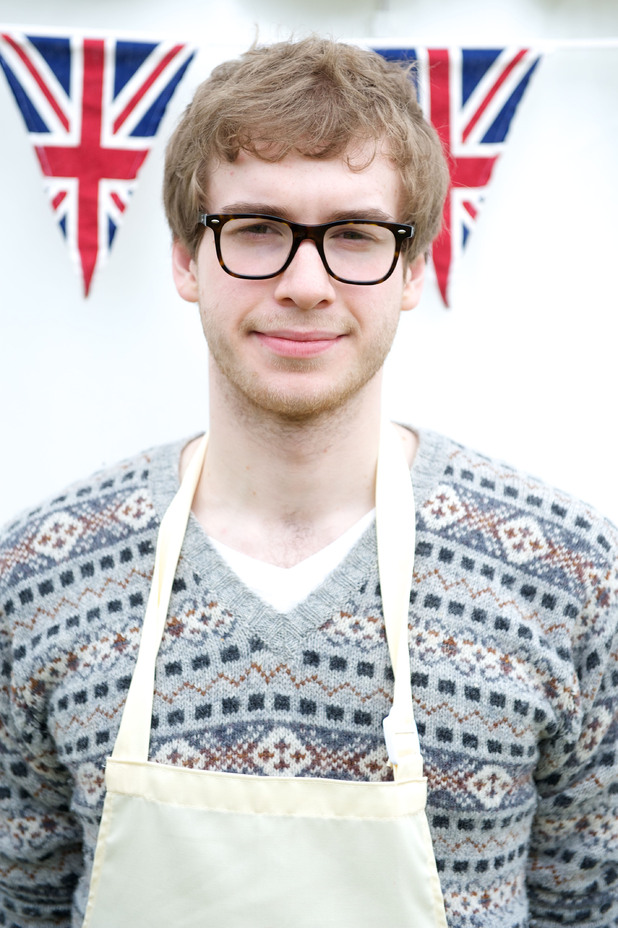 But Cathryn came a close second for me because not only is she a great baker but she has a lovely habit of giving a running commentary on everything and talking to inanimate objects. 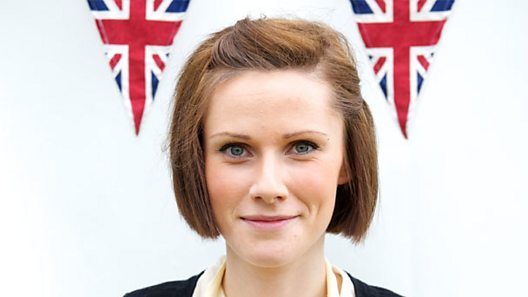 I loved her reaction to things going wrong – no black belt cursing and swearing on the BBC of course but she did say: Oh my giddy aunt! – a lot, and there’s not enough of that one around to suit me. Last week she even resorted to Heavens to Betsy! The only person I’ve heard saying that recently is myself and I even give Heavens to Murgatroyd an airing now and again.

I’m reserving my black belt cursing for all the ghastly politicians who are cluttering up our TV screens at the moment, on both sides of the pond.

Anyway, here’s a wee taster of the Bake Off, as you can see, Cathryn is the young woman at the beginning of it. She has gone back to looking after her young family but I’m sure she’ll end up using her talent for baking somehow in the future.

What have I been doing recently? Well apart from the boring house stuff I’ve made time to visit Evelyn at Evee’s Blog. I must admit that Evelyn found ‘Pining’ first as she’s interested in Scottish words and that’s how she got to me. I’m so glad that she did as her blog is a beautiful place to visit with gorgeous photos of places she has travelled to and scenes more local to her base in the Scottish border town of Peebles. So if you love things Scottish and photos of plants, gardens, houses and crafts do yourself a favour and hop over to Evee’s Blog.

Otherwise I’ve been watching The Great British Bake Off where the baking tasks are getting fiendishly difficult but already we’re down to the last three contestants so next week is the last one. Janet was my favourite baker and I really hoped she would win but it wasn’t to be, her undercooked pastries let her down. I’m not sure who I want to win now.

Tonight we watched Billy Connolly’s Route 66 Road Trip of America. The third one in the series I think, I like armchair travelling especially when it’s to places that we’re never likely to visit. Tonight he was in Oklahoma, Arizona and Texas where as usual he met interesting locals. The rodeo reminded me of an Annie Proulx short story, those riders are completely nuts. He also visited a barbed wire museum in a place called Mclean, who would have thought there were so many different kinds of wire! It probably beat the pencil museum in Cumbria – or wherever it is. The best scenery was in Monument Valley.

If you have time have a look at some of the first episode.

I was having a look at You Tube – as you do – I was hoping that there was a clip from STVs The Hour programme of the Scottish author Gordon Ferris, but no such luck. It was Judith (Reader in the Wilderness) who alerted me to his existence, he’s a crime writer and his books are set in Glasgow. I’m going to try them out in the hope that he manages to capture the great character of my birthplace. I read just one book by Denise Mina and I was disappointed with it because she failed completely on the Glasgow front, but maybe that’s only noticeable if you know the city.

Anyway, back to You Tube, I noticed that there are some videos of The Great British Bake Off on it. I never watch any of these reality/competition things, Big Brother and ‘Strictly’ type things just don’t appeal to me. But I must admit that I started watching the Bake Off, well the first one was on in the background when I was on my Netbook and I kind of got dragged in.

At first I was amazed that some of the contestants had been daft enough to bring in shop bought things to add to their celebration cakes. It’s the sort of thing we all do for kids cakes but surely not in a competition! Then I was less than impressed that they all seemed to make their pastry in machines and some of them had never made pastry before. Machine made pastry was not a success. My boys got cookery lessons at school, including hand-made pastry and there was still time for all the academic stuff.

Mind you when they got to the bread making bit I was full of admiration because the couple of times that I’ve tried to bake bread have been disastrous. I couldn’t even have put the results out for the birds because the RSPB would have done me for cruelty! My bread was so heavy the only possible uses for it would have been as doorstops or even anchors.

Anyway if you’re interested in baking, or just looking at food you might like to have a wee keek! They’re starting off with cup/fairy cakes. Kids stuff!

On the Gordon Ferris front – all of his books are out in my local library so he’s obviously popular, I might have to put in some requests.