Reality and Dreams by Muriel Spark was first published in 1996. It begins with Tom Richards who is a film director, he is in hospital as he has fallen off a crane whilst filming and he has broken a lot of bones, he’s lucky to be live apparently.

It’s the story of him and his dysfunctional family really but as none of them are particularly nice characters I found it difficult to get involved in it all. That could explain why although it’s only about ten days since I finished it, I find it has faded rather quickly from my mind – and that says it all really.

I do find Muriel Spark to be quite hit and missish. This was another choice from a local library and I thought I would give it a go as I haven’t read many of Spark’s more recent books, on balance I think I prefer her earlier work. Of course this is another one which qualifies for the Read Scotland 2014 challenge.

I’m way behind with my blogposts and I meant to comment on the sad news of Deborah Mitford’s death when it was announced a few weeks ago. After watching that BBC programme about Chatsworth last year I really thought that she looked good for another good few years but it wasn’t to be.

Well, she was 94 so she definitely had a good innings but she was far and away my favourite of the Mitford sisters and despite the fact that her family thought of her as being rather brainless she was actually the most talented of them all I think. She was the youngest of course so I was obviously going to have a bit of an affinity with her as I’m also the youngest of a large family – but that’s as far as the similarities go though!

If you’re interested in reading her Guardian obituary have a look here.

You can read a report of her funeral here. 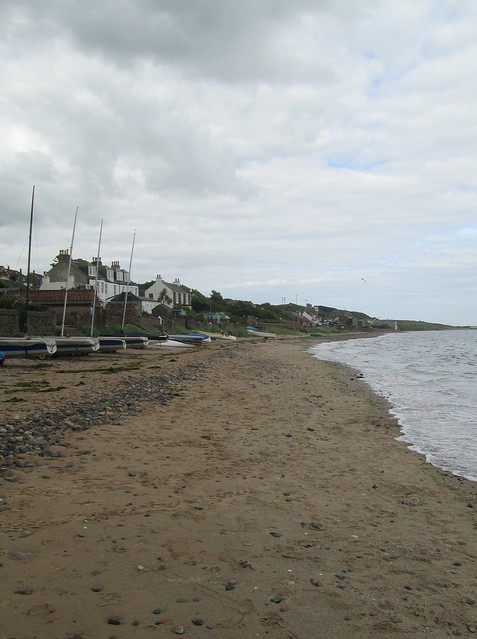 I’ve been visiting quite a few places along the Fife coast of Scotland, doing a bit of beachcombing, really looking for sculptural bits of driftwood to add some interest to the new garden. It hasn’t been as successful as I had hoped, I suppose because the weather has been so calm, recently, the sea isn’t flinging much back at us. Anyway, above is a photo of a bit of the beach at Lower Largo, it used to be a fishing village, before that industry was decimated, now the boats are just small pleasure craft. 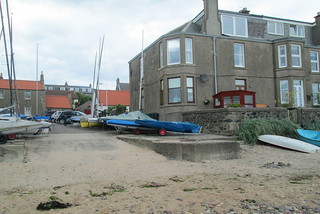 These flats are right on the edge of the beach. I don’t know about you but that doesn’t appeal to me at all. A lot of people are obsessed with having a sea view, especially if they’ve grown up near the sea. But I don’t know how they can ever sleep on stormy nights, and there are plenty of those in a year. Also the sand gets into the houses, that would drive me nuts. 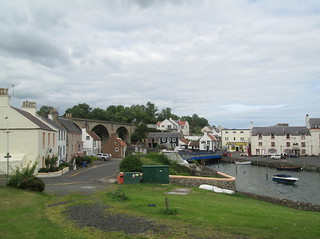 The photo above is of the most bustling part of the village, because that’s where THE shop is. It doesn’t look too hot in these photos but it was hot, in fact we both got ice cream cones from the shop – or as we call them in Scotland – pokey hats. As you can see there’s a viaduct there but no trains go over it nowadays. In the good old days before Dr Beeching’s savage cuts to our rail services this would have been a busy line, filled with holiday makers and tons of freshly caught fish must have been packed onto trains, heading for the big fish markets in Glasgow and London. 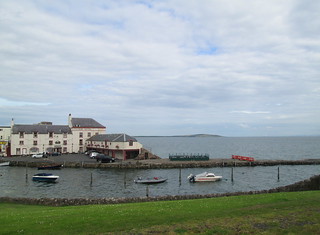 Standing on the same spot I turned slightly to my right to take the photo above, it’s of the Robinson Crusoe Hotel, named that because the man who inspired Daniel Defoe to write Robinson Crusoe came from Lower Largo. His name was Alexander Selkirk and you can read about him here.

Are you ready for another wee walk? Last Saturday was one of those dazzling bright days which you only seem to get by a coast, so we decided to drive along to Dalgety Bay for a wee bit of a change of coastal view. We had intended going to see St Bridget’s Kirk which is a very old church ruin. We’ve been passing a sign pointing to it for donkey’s years but have always just wheeched past on our way to Dalgety Bay. The photo below is of Braefoot Bay terminal as seen from Dalgety Bay. The sailing club is very close to where we were standing and as you can see, just to the right of Braefoot there were some yachts sailing about, it was a great day for it as the sun was actually quite warm, amazing for the time of year. I’ve never seen more than one or two yachts at a time together but this lot seemed to be taking part in a sort of sailing equivalent of an eightsome reel, it looked like good fun. Here they are a bit closer. We realised that due to there only seeming to be the one signpost pointing to St Bridget’s Kirk we had ended up going in completely the wrong direction. I suggested walking to St David’s Harbour to have a look at the information board there which has a map.

The result of that was we had to retrace our footsteps and go along a bit of the coastal path that we hadn’t visited before to reach the old kirk, but more of that walk tomorrow.

Frances Trollope was the mother of Anthony Trollope, she had several children, two of whom became writers, and she is thought to have influenced Harriet Beecher Stowe’s writing, as Frances wrote about slavery before Stowe did.

In The Widow Barnaby, Agnes Willoughby is just 17 years old and is alone in the world, apart from a couple of aunts, and she has only met one of them, Aunt Barnaby. So Agnes is completely dependent on her aunt for everything, unfortunately Aunt Barnaby is such a common, vulgar female that she is a big disadvantage when it comes to Agnes’s personal life, for she has fallen in love with Colonel Hubert, a man over twice her age but Agnes realises that when he and his family meet Aunt Barnaby they will be so appalled by her flirting, mode of dress and general ‘common as muck’ behaviour that Agnes will be dropped quickly.

The situation gets worse when Aunt Barnaby is hauled off to London’s infamous Fleet prison for non-payment of her debts, leaving Agnes with no alternative but to write a begging letter to the aunt that she has never met, something which Aunt Barnaby has always warned her against as the two were not on speaking terms.

This is a quick read, compared with Anthony’s massive tomes anyway and if you enjoy Victorian literature you might want to give it a go.

I enjoyed this one which I got from Project Gutenberg, here.

The character of Aunt Barnaby is very similar to that of Aunt Morrow who appears in Anthony Trollope’s Can You Forgive Her? It would seem that Anthony definitely read his mother’s books, maybe they were both using an acquaintance of theirs as copy, or perhaps cheap widows who were determined to track down their next well off husband were a staple of that society.

After a three week enforced break from blogging due to no internet connection – Evee’s back at last. If you want to see her most recent lovely photos of Scotland have a wee keek here.

This will be the first Classics Club Spin which I’ll be taking part in and all I’m saying about it is – please don’t let it be number 14.

1. Deerslayer by J. Fenimore Cooper
2. Uther and Igraine by Warwick Deeping
3. Poor Caroline by Winifred Holtby
4. The Lady of the Camelias by Alexandre Dumas
5. Homage to Catalonia by George Orwell
6. The Road to Wigan Pier by George Orwell
7. Dead Souls by Nikolai Gogol
8. Oblomov by Ivan Goncharov
9. The Power and the Glory by Graham Greene
10. The Talisman by Walter Scott
11. Ivanhoe by Walter Scott
12. Anna Karenina by Leo Tolstoy
13. Nana by Emile Zola
14. Moby Dick by Hermann Melville (dreading)
15. The Crowded Street by Winifred Holtby
16. The House of the Seven Gables by Nathaniel Hawthorne
17. An Unsuitable Attachment by Barbara Pym
18. The Courts of the Morning by John Buchan
19. The Gap in the Curtain by John Buchan
20. Love by Elizabeth von Arnim

One of my favourite sites is Astronomy Picture of the Day, isn’t this one a beauty? It’s a Meteor and Moonbow over Wallaman Falls, Australia. But I love this astronomy picture quilt too, by quilter and astronomy enthusiast Judy W. Ross. It’s definitely different and there’s such a lot of work involved in it, it really makes me want to get stuck into quilting. Well he has done it – at last. Unfortunately it was at the US Open so I didn’t actually see the match, not having whichever network was showing it from Flushing Meadows. Maybe that’s just as well as in the past I’ve had to leave the room, the stress just being too much to bear.

I love this post match interview with Andy though. It’s about 2 minutes into it before he smiles. You could be forgiven for thinking that he had lost the match, his words just don’t match his face. It looks like he wants to cut his throat, he’s the ‘dour Scot’ personified! It’s a scream.

I can’t make up my mind, is it for real or is he just playing that role for the cameras?

If you’re interested in Scotland you’ll want to visit Evee’s blog. At the moment Evee is being a friend in deed (indeed) as she’s looking after a friend who is just out of hospital.

Her recent posts have been from Yorkshire and now they have moved on to the Braemar area of the Scottish Highlands. Evee has taken loads of great photos of the area, including Balmoral, the Queen’s Highland home. It looks like a fairytale castle.