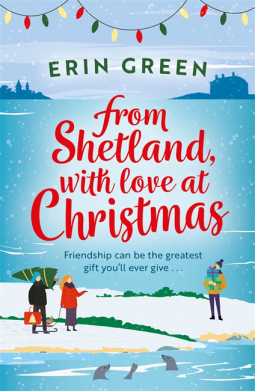 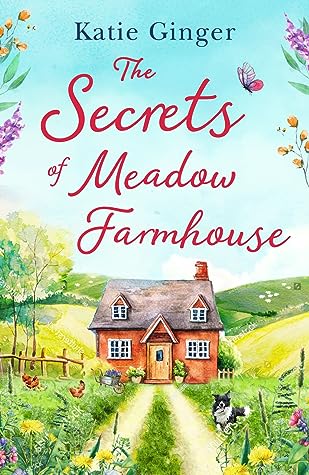 The Secrets of Meadow Farmhouse by Katie Ginger is the first book that I’ve read by the author, it’s not really my usual sort of book but it was a bit of a comfort read in pandemic times, and despite having a fair idea of how it was going to end (this is possibly an attraction of romances – no big shocks!) I still found it to be an entertaining read.

Amelia has been living in Paris for the last ten years, she has carved out a successful interior design career there and seems settled, but when she unexpectedly inherits a farmhouse from her Great Aunt Vera she returns to Meadowbank, the village in England where she had grown up, to deal with the sale of the farmhouse. Amelia’s parents had died when she was only eight years old and Vera had taken her in, but when Amelia left the village to go to university she and Vera had had a disagreement – and Amelia had never returned.

But it wasn’t only Vera that Amelia had cut ties with. She had promised to contact her boyfriend Adam who also lived in the village, but she hadn’t done so. Adam is still living in the village and Amelia is nervous of meeting him again, in reality it’s his mother that she should be nervous of!

While Amelia is clearing out Vera’s cottage she is intrigued by a locket that she finds there. It has two photographs in it, but no clue as to who they are of. Maybe a local historian will be able to help her. Vera had always been rather standoffish with the villagers but Amelia finds them to be friendly and she realises that she doesn’t really have any friends in Paris. That coupled with the fact that she is growing more attached to her old childhood home leads her to re-think her plans, but will Adam feature in them? This was an enjoyable read.

The Secrets of Meadow Farmhouse was published on the 17th of March 2021 and I was sent a digital copy of it via NetGalley. 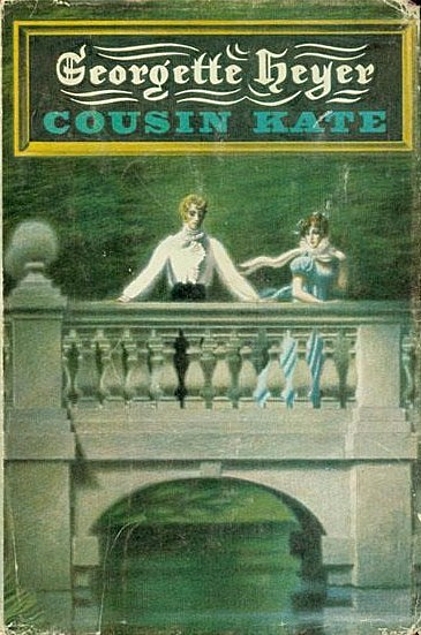 Cousin Kate by Georgette Heyer was first published in 1968, so it was the third last of her books and for me it seemed quite different from her other romances. The actual romance part was more or less over by around the middle of the book, and there was a distinct lack of the witty repartee that I enjoy so much about her dialogue.

Kate Malvern has been brought up ‘following the drum’ as her father had been a professional soldier, her mother had died young, so Kate isn’t your average Regency lady. She has had to work as a governess to support herself and when she loses her job she has to move in with Mrs Nidd who was her nursemaid.

Sarah Nidd writes to Lady Broome who is Kate’s Aunt Minerva, asking if she can help her niece and the upshot is that Kate is taken by Lady Broome to stay at Staplewood, her large home. Her husband is Sir Timothy, a much older man and he has more or less withdrawn to his own wing of the house as his wife is an overbearing bully and he just won’t stand up to her. His only friend had been his nephew Philip, but Kate becomes the daughter that he had never had.

Kate realises that her aunt has an ulterior motive for her invitation to Stapleton, she wants Kate to marry her son Torquil. He’s completely in his mother’s control, he’s always had delicate health, but it’s his mental state that worries Kate. He has tantrums and generally behaves like a three year old and his mother employs Dr Delabole to dose him up when he has a turn. His mother is desperate for him to produce an heir, but it needs to be with a wife that would also be under the control of Minerva his mother, she thinks Kate would be the ideal wife. Kate thinks differently.

This book dragged for me a bit although I must admit it got a bit more interesting towards the end, but it isn’t one of her best, mainly because of the lack of humour and wit which I’ve come to expect from Heyer’s writing. 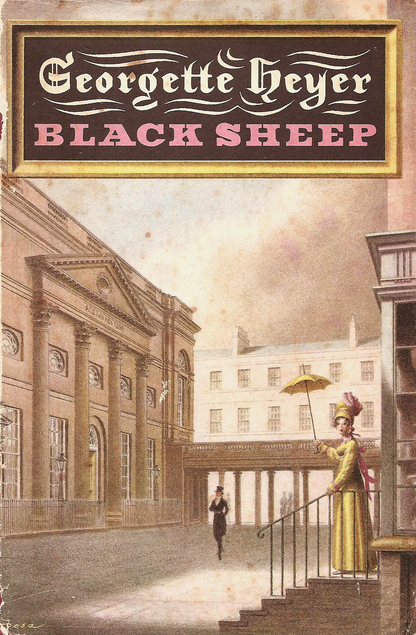 Black Sheep by Georgette Heyer was first published in 1966 and my copy seems to be a first edition. If you’re wondering which book to read next from your to be read stacks and you just can’t make up your mind – as I often can’t, then a Georgette Heyer book will always hit the spot – I find.

The setting is Bath where unmarried sisters Abigail and Selina Wendover share the custody of their seventeen year old niece Fanny. Fanny’s parents are dead but have left her very well off when she comes of age, meaning that she’s a prey to all fortune-hunters – a type of beast which haunts the streets of Bath.

Stacy Calverleigh also inherited a large fortune but he has run through it all with his serious gambling habit and in no time at all he’s targetting Fanny for her money, and she very quickly believes she’s in love with him. But her Aunt Abigail knows of Stacy Calverleigh’s reputation and is determined to protect Fanny from him.

This brings Abigail into the society of Stacy’s Uncle Miles. He is the Black Sheep of his family and was sent out of the way to India to find his fortune (or fail) twenty years ago. Miles Calverleigh has just returned from India for good but he isn’t interested in his nephew, he’s enamoured of Abigail. But she believes Miles is a bad lot, she knows that he was expelled from Eton before being packed off to India, so she’s not interested in him.

If you’ve already read Georgette Heyer’s books you’ll know that there’s a lot of witty dialogue involved. The blurb on the inside dustcover says:

Black Sheep is one of Miss Heyer’s lighter-hearted romances, with a charming heroine and a most intriguing hero – mysterious, good humoured, cynical, outrageous and in the end irresistible.

Still Glides the Stream by the Scottish author D.E. Stevenson was first published in 1959 but my paperback copy is a 1973 reprint.

To begin with the setting is the Scottish Borders where Will Hastie has returned to his childhood home after being away for twelve years. His return is tinged by sadness as Rae his childhood best friend was killed in World War 2 and everywhere Will goes brings back memories for him and makes Rae’s absence all the more sharp.

To make matters worse Rae’s mother is suffering from some form of dementia and she keeps expecting Rae to turn up at any time, she’s constantly talking about him. Rae’s father is a retired colonel and his family home is entailed so he’s obviously worrying about what will happen to his wife and Patty his daughter when he dies as the house and land will then be owned by a cousin.

Like many elderly parents the colonel is keen to see Patty settled so that he doesn’t have to worry about her being left on her own and homeless when he dies, but his anxiety might be leading him and Patty in an unwise direction.

Will begins to feel left out of things and decides to take a walking holiday in France, in the area where Rae had been killed, hoping to track down the farmer that Rae had been billeted with and possibly get some information from him. Rae’s last letter had been rather cryptic.

This was a really enjoyable read and I particularly liked the settings of rural Scotland and the more exotic ambience of the south of France. D.E. Stevenson often gets in a wee nod to her more famous relative Robert Louis Stevenson and she has Will saying that he isn’t travelling with a donkey.

On the back The Bookman says: “Hypnotically readable.”
and from Books and Bookmen “Skillfully blends love of people and love of the countryside.”

What do you think of the 1973 cover of this book? I think it’s ghastly, that era must have been a particularly low point for book covers I think.

Frederica Merriville is the eldest daughter in her family and has been thrust into a position of authority due to their mother’s early death. Frederica is only in her 20s but has absolutely no ambitions for herself, beyond looking after her younger siblings. She’s determined to get her beautiful young sister Charis married off successfully and with this in mind she takes her off to London to launch her into high society.

The Marquis of Alverstoke is their very distant cousin, he’s in his 30s and very much the man about town, wealthy and fashionable and has had more than a few affairs but has managed to dodge marriage.

To Alverstoke’s astonishment he finds himself being charmed by his young relatives, particularly the youngest Merriville boy, Felix who is obsessed with steam and the technological advances of the day.

The story is heavily littered with Georgian slang and has plenty of humour. It reminded me of an English upper class version of O.Douglas’ books, which almost always feature a managing but young mother figure of motherless children, and particularly a cheery and lovable lad aged about ten.