Arthur the King by Scottish author Alan Massie was first published in 2003 and has been waiting in my TBR pile for absolutely yonks and I sort of wish I had just left it there. I usually love books involving King Arthur, the Mary Stewart Merlin series is my favourite but I’ve also really liked T.H. White’s The Once and Future King, which I know some people have found to be very dry.

I’ve enjoyed previous books by Allan Massie but for some reason he decided to employ a really clunky and archaic writing style in this one. His take on Arthur and Merlin and a lot of the minor characters is unusual in that he has them having same sex relationships. It’s all very ‘right on’ I suppose but I don’t think it adds anything to the story. Arthur’s relationship with Morgan Le Fay is a long standing one, not a one off aberration as in most versions of the tale.

I suppose I just prefer my Arthurian tales to run along the more traditional lines but if you haven’t read those ones then you might find Arthur the King to be acceptable, it just wasn’t for me, but as I almost always finish a book which I’ve started to read in the hope that it’ll improve, I struggled on to the end, then was annoyed with myself for doing so.

Ah well, let’s hope the next book is more enjoyable. At least this one counts towards the Read Scotland 2014 challenge. I’ve lost count now, I think this is number 23 or 24. 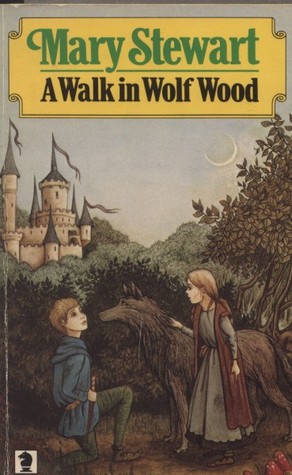 A Walk in Wolf Wood is one of Mary Stewart’s children’s books and features some of the themes which often turn up in her adult books, magical fantasy and mystery. It was first published in 1980 and this paperback in 1981. I don’t know about you but I like the fairy tale castle on the cover. I read this as part of the Scotland 2014 challenge. This has been my sixteenth book.

John and Margaret Begbie were having a picnic in the Black Forest with their parents. The parents were drowsy after their meal and when a weeping man walked past John and Margaret they decided to follow him to see if they could help him. So begins an adventure into the past, featuring a duke and his household and a werewolf.

It reads like an updated fairy tale and is an enjoyable story, I think I would have loved it if I had read it as a 10 year old but it wasn’t bad reading as an adult. 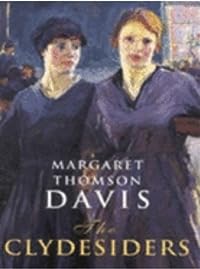 I thought it was about time I got around to reading something by Margaret Thomson Davis, my mum was a fan of her books years ago.

The Clydesiders begins in 1914, just before the outbreak of war and Virginia is in service, not allowed to be seen by the family she was working for. She’s from the east end of Glasgow where life was grim and the houses insanitary, overcrowded and infested with vermin. There really wasn’t any space for her to live at home with her parents and two older brothers, but life working for the Cartwright family wasn’t easy either. The book ends in 1920.

I really enjoyed this, the story is woven around actual facts and I always like social history, I’d really rather know about what was going on in ordinary people’s lives than the aristocracy.

In Glasgow during World War 1 living conditions for the majority of the population were dire and it caused a lot of social unrest. The landlords kept putting up the rent on flats which were really unfit for human habitation and something had to give, especially when you consider that most of the menfolks were off fighting in the trenches.

Men like John Maclean, a teacher, fought against the oppression of the people and there were rent strikes and riots in the streets. The name Red Clydeside was coined and in 1919 the British government sent tanks into the streets of Glasgow. The men were only asking for a maximum 40 hour working week, and after serving in the war I don’t think that that was too much to ask. Bolshevism was the terror of the day, given that the Russians had just had a revolution, but it was a terrible response to men who had spent the last four years fighting for King and Country. Most of the working men didn’t have a vote at the time as you had to own property before you could vote, so the Suffragettes weren’t the only people in need of voting rights.

I read this as part of the 2014 Read Scotland Challenge.

The ‘it’ which the McFlannels are seeing through in this the second book in the series, is of course World War 2. The McFlannels are all doing their bit as is everyone living up the same close in Glasgow. Mr McMuslin is an Air Raid Precaution Warden (put that light out!) and is fairly enjoying himself trying to organise his neighbours. Sarah McFlannel is really only interested in seeing the inside of the McMuslin flat though and when he implies that she can’t take part in the fire watching (looking out for fires caused by bombs) because you have to be under 60, Sarah is incensed, she’s not much older than 50.

The book is full of laughs although as they’re in broad Glaswegian – especially when it’s Willie McFlannel speaking – I’m not sure how well it will go down with non Glaswegians. For me though it brings back so many phrases that I had just forgotten about, and I love the relationship between Willie and Sarah McFlannel. Their children are almost off their hands now, but Willie is still always looking for a ‘wee cheeper’ (a kiss) from Sarah, and Sarah is always being shown up by her husband’s broad Glaswegian accent. Long may it live!

In this one Willie ends up in hospital, having had an accident at work. He keeps dropping in and out of consciousness and one woman says:” Ah mind when Ah had ma operation for ma perspirated stummuck, there wis a wumman in the next bed that was aye drappin’ intae unconsciousness like that, and she was deid in hauf an hoor.” Poor Sarah isn’t amused.

There are quite a few books in this series but the first two have hit the mark with me because the first one was all about the McFlannels flitting and moving up the housing ladder, just as we were arranging our flitting. At the end of The McFlannels see it through they are thinking about downsizing as the kids have grown up, we followed the same pattern as I was reading the books. I wonder what will happen in the next one.

Whatever, I’m sure that there will still be a rivalry between Mrs McFlannel and Mrs McCotton, it’s what’s keeping them going!

I read this one as part of the Read Scotland 2014 challenge.

I’m back – after a few days away, due mainly to life getting in the way and specifically to idiots viewing our house.

Anyway, the only thing keeping me semi-sane at the moment is reading and I’m behind with blogposts. A couple of weeks ago I finished reading Mrs Miniver. It’s one of those books that just seems to have always been there, probably more because of the film than the book. Anyway I realised that I had never read the book, nor even seen the film although I’ve probably seen some clips from it.

The first thing that struck me when I read the blurb on the back of this Virago is that as Jan Struther was of Scottish heritage then this one would be fine for Peggy Ann’s Read Scotland 2014 Challenge. Her father was Henry Torrens Anstruther, an Edinburgh advocate and Liberal MP for St Andrews. Jan Struther was the pen name of Joyce Anstruther, she dropped the -An- of the surname as her mother was also a writer using the name Anstruther. Jan married Anthony Maxtone Graham which is of course another weel-kent Scottish surname.

‘Mrs Miniver’ was originally a column which was published in The Times, beginning shortly before the start of World War II. She was asked to write the column by Peter Fleming, brother of Ian Fleming, it’s funny how all those bookish people are linked one way or another. Jan Struther obviously based the Miniver family on her own. Mrs Miniver’s family is described as being middle class but I think upper middle is nearer the mark as in 1939 you had to be pretty well off to be able to afford a car and indeed a cottage in Kent as well as a house in Chelsea. Nowadays you would have to be a multi-millionaire to afford that life-style of course!

Having said that Mrs Miniver did write about things which everyone was experiencing, like getting gas masks and going out in a black-out for the first time (inky), driving to Scotland ( and I must say if you’ve never done that then it’s high time that you did), visiting Highland Games, at the end of which Mrs Miniver writes: The music began to quicken intolerably for the final steps: and Mrs Miniver saw the rest through a mist. For I defy anyone, she said in self-defence, to watch a sword-dance through to the end without developing a great-grandmother called Gillespie.

First published in book form in 1939 and later in film, which I believe is quite different from the book, but Churchill credited it with doing more for the Allied cause than a flotilla of battleships. It’s a fun but informative read.